Clearing a Path: Theorizing the Past in Native American Studies

In eight provocative essays, university scholars and tribal leaders look at cutting edge theoretical approaches to researching and writing Native American history. Shoemaker, as editor, provides a superb introduction in which she defines and defends theory. She readily admits that theory “can be tricky” because it is not always obvious what it is or does. “If you do not care for the word theory,” she writes, “then think instead of these essays as dealing with models, paradigms, perspectives, ideas, narratives, research questions, or analytical frameworks” (pp. vi-viii). Shoemaker borrows a metaphor from Native American diplomacy and ritual (“clearing a path”) to suggest that at its best, theory can make it easier for us to see and understand the past. 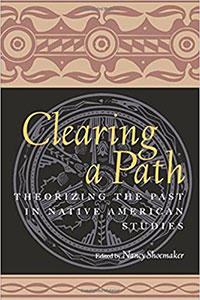 Shoemaker has organized the essays into four sections: 1) narrative and storytelling, 2) social and cultural categories, 3) political economy, and 4) tribal histories, indigenous histories. The divisions generally work well, pairing authors who are wrestling with similar theoretical and methodological demons. In addition to listing footnotes at the ends of their essays, authors, in what seems a model of generosity, have provided extensive compilations of “references,” making Clearing a Path an excellent resource for anyone wanting to get familiar with Native American studies. Some of the “references,” for instance, are ten or more pages long. Graduate students preparing for general exams or professors trying to work up new courses will find these lists invaluable.

In the first section, Julie Cruikshank and LeAnne Howe demonstrate the importance of oral history and storytelling in coming to terms with the ways Native peoples connect past and present. In her essay, which focuses on the Yukon Territory in Canada, Cruikshank uses interviews she conducted with Tagish and Tlingit women in the 1970s and 1980s to explain how “global stories” of the gold rush and Alaska Highway “are experienced locally” (p. 12). LeAnne Howe’s essay, “The Story of America,” supports Cruikshank’s assertion that Native stories are centrally important to Native American history. Howe excerpts bits of oral tradition to advance perspectives – such as the one that the “founding fathers” of the United States took inspiration from political and social concepts at play in Six Nations communities (p. 37).

Shoemaker shines again in the next section having to do with social and cultural categories. She leads with an essay explaining what categories are and why they matter. Writing in crystal-clear prose and refusing to submit to the obfuscations of previous scholars, she wonders how people use categories. Shoemaker does a particularly good job dissecting scholarship on “marked” and “unmarked” categories. Gunlög Fur’s essay follows logically. In her meaty meditation on the category of gender, Fur tries to make sense of women’s “invisibility” in historical records.
The political economy section is a standout, with a fierce and funny essay by Patricia C. Albers defending Marxism and materialism and a spectacular piece by Jacki Thompson Rand using the musings of Arjun Appadurai to justify a reconsideration of standard primary source materials. Looking at mid- and late-nineteenth-century primary sources, including a treaty, a speech, and records concerning annuities and trade goods, Rand is able to explain how Kiowa women and young men resisted U. S. government reservation policy and even managed to maintain some amounts of cultural independence. Her analysis of women’s beadwork is nothing short of brilliant.

Shoemaker lumps together the final two essays in the collection under the heading “Tribal Histories.” I am not sure I see a common theme running between Craig Howe’s piece describing the uses of new technologies in preserving and circulating Native histories and James F. Brooks’s deliberation on the ways colonialism encourages “culturally sanctioned violence” by creating unstable hybrid identities in Chechnya, Rwanda, and Native North America. (He is thinking specifically about Crees.) That is a small complaint given the significant contribution Shoemaker has made in clearing a path for these works to come to light.