Family Papers and the History of Sephardic Jews

Two tragedies have shaped the fortunes of the family of Sa’adi Besalel Ashkenazi a-Levi, an iconoclast and printer: the catastrophic fire in Salonica in 1917 and the Nazi Holocaust. Readers of Family Papers: A Sephardic Journey Through the Twentieth Century will likely be well acquainted with the particulars of the latter tragedy but not necessarily with the first. And until they encounter Sarah Abrevaya Stein’s small gem of a book, published by Farrar, Straus and Giroux in the fall, they will not appreciate the connections between the two. 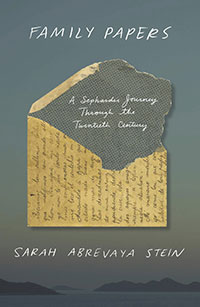 Stein, who holds an endowed chair in Sephardic studies at UCLA and is director of a center for Jewish studies there, has published many chronicles of the history of Jews in Africa and Southern Europe. With Family Papers she has turned her attention and formidable research skills to one particularly gifted and colorful family that included publishers, textile importers, a vicious Nazi war criminal, and the founders of the Danone yogurt empire.

It was possible for Stein to research and write the history of this family because a memoir, letters, newspapers, photographs, and trial transcripts survived — against considerable odds — in family collections and archives scattered around the world. Stein’s acumen as a linguist deserves mention. She has managed to work with sources in the Sephardic language Ladino, as well as Spanish, French, English, Portuguese, and Hebrew. Her writing is blessedly free of academic jargon, allowing nonspecialist readers to savor ample descriptions of culture, as well as insights into individual characters and poignant revelations related to their choices.

Salonica stands as the beating heart of Stein’s tale. The port city was part of the Ottoman Empire until World War I, when it became Greek and was redubbed Thesssaloniki. Before the fire of 1917, which obliterated the Jewish business district, almost half of the city’s population of more than 100,000 was Jewish. Most were descendants of Jews pushed out of Spain during the Inquisition in the 15th century. Stein deftly paints a loving portrait of Salonica before the fire, gently dropping interesting observations and details pertaining to both the a-Levi (Levy) family and the city into her story. She demonstrates the diminution of the vibrant Sephardic community as she explains the movements of Sa’adi Besalel’s children and grandchildren after the fire. Some remained in Thessaloniki, some emigrated to other parts of Europe, and one son made his home in Brazil. These choices positioned the various branches of the family to have dramatically different experiences during World War II. Those who stayed in Greece or made lives in Paris bore the brunt of the Nazi genocide.

Stein has organized the book around individual members of this sprawling family. The scheme sometimes requires her to double back awkwardly over ground she has already traversed. But the book’s organization is mostly fortuitous, because it allows her to make personal the kinds of academic issues that can deaden prose. She does not, for example, lecture readers on the problems of creating women’s histories when they are omitted from written record. Instead, she thoughtfully and creatively puts women back into her story, describing how their needlework kept the family afloat during lean times, or explaining how men’s letters make clear that one loving mother — likely illiterate — would send edible delicacies with travelers expected to visit or return to far-flung family members.

When it comes to history, attention too often is focused on “big books,” exhaustive doorstops and multivolume extravaganzas that bog down in seemingly endless minutiae. Stein demonstrates in the economy and careful craft she uses to produce Family Papers that sometimes less is more.

She inserts herself into the narrative at times, giving readers a sense of the thrill of the chase as she discovers evidence on continents spanning the globe. She details the significance of the handwritten copy of the memoir that the clan founder dictated to a scribe in Salonica as his eyesight failed him. (The document now rests in the National Library of Jerusalem.) Her research took her from UCLA to northern California; Manchester, England; Rio de Janeiro; South Africa; and Greece. She cannot contain her pleasure in reporting that though many in the family no longer maintain or even understand their ties to Salonica, most identify as Jews. She reports on the strangeness, as someone who has spent a career exploring the distant past, in realizing her work’s connection to those living in the present.

Stein expresses gratitude to family members who were open to her questions. “Those who availed themselves tended to remember ever more with time, to unearth further documents, photographs, and memories than they realized they possessed,” she writes. How lucky are readers that it was Stein who chose to follow the many leads and that it was she — an indefatigable sleuth, learned scholar, and elegant writer — who persisted in teasing out their many important and riveting stories.