In Out Loud: A Memoir, Mark Morris Bares All

But the modern dance master is less than self-aware

“Whatever is in him,” the critic Joan Acocella wrote of Mark Morris in her 1993 biography, “out it comes. This goes for his dances — he creates with extraordinary ease — and for everything he does.” In Out Loud, the memoir that the pathbreaking dancer, choreographer, and conductor Mark Morris has released with the assistance of musician and writer Wesley Stace, out comes a running commentary on Morris’s loves, lives, and works. At best, this as-told-to style reminiscence, published in October by Penguin Press, is diverting and wickedly funny. At worst, it reveals an aging bully imperfectly aware of the effect of his actions. 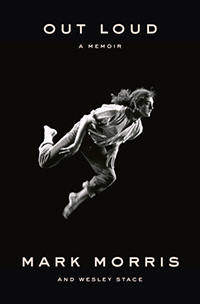 The unfolding story in Out Loud will be familiar to those who have followed Morris and his extraordinary career in contemporary dance (he’s a 1991 MacArthur Fellow and has been awarded 11 honorary doctorates). There is information on Morris’s humble beginnings in Seattle with his loving and artistically minded family, during which he embraced fabulousness by putting on amateur theatricals, making movies, and singing aloud. He describes his early training as a dancer, his participation as a young teen in the all-consuming folk collective Koleda, and his departure from a conventional education in high school.

Morris focuses on his coming-of-age as a sexually adventurous gay teen with a passion for world music and movement as well as his conviction that modern dance could provide a path away from narrowly defined gender expectations. Dancing in New York, illustrating the vibe of queer downtown Manhattan in the 1970s, establishing the Mark Morris Dance Group, directing Belgium’s national ballet at La Monnaie, finding a physical home for his troupe and school in Brooklyn, and collaborating with the likes of Mikhail Baryshnikov, Peter Sellars, and Yo-Yo Ma — all are covered in the book.

Morris and Stace have organized the memoir around specific dances and productions. For example, “Dad’s Charts,” “Brummagem,” “Gloria,” “L’Allegro,” “Dido and Aeneas,” and “The Hard Nut” each have their own chapters. While this scheme may be satisfying to readers familiar with Morris’s choreography and his ingenious use of music, especially baroque music, it may be frustrating to those who have never encountered Morris’s brand of modern dance. It may take a particular kind of reader to enjoy Morris’s detailed descriptions of staging, costumes, and sets. They’ll likely catch themselves laughing aloud when they encounter Morris’s barbed comments and catty takedowns of most of his employers, teachers, and collaborators, including Twyla Tharp, Paul Simon, Derek Walcott, and Leon Botstein.

The bigger problem with Out Loud is its periodic attempts at self-reflection, which struggle to dive deep beneath the surface. For example, about halfway through the book, Morris holds forth on marriage and sex. “I advise everybody against living together as a couple,” he says. Sex, he explains, is something he has every once in a while, but not, apparently, with emotional attachment. He describes an orgasm he experiences during an Ayurvedic massage in India as “a full sexual awakening at 50” but never explains how the insight informs the decade thereafter.

A business partner tells Morris that his “perfect boyfriend” would be “someone I visited in prison.” They’d look at each other longingly, “then I’d leave and get back to work.” Intended to be funny, the anecdote is cringe-inducing. The sentence ends a chapter, and Morris moves on.

“Sometimes, I’m not on speaking terms with anybody,” the aging enfant terrible allows in the book’s last chapter. He explains that he “had a late-arriving realization” in 2016 that he needed to change the way he behaves toward those dancing in his company. The realization, he says, did not come on its own. Nancy Umanoff, executive director of Mark Morris Dance Group, to whom he dedicates Out Loud, apparently forced Morris to consider the ways he was taking out his frustrations on his dancers. He acknowledges that he can’t apologize easily, has “always been vulgar,” and that he “can certainly be mean.”

The passages in this section seem scripted by H.R. Morris does not fully reckon with his own behavior. He can’t view a harrowing adolescence as anything but a tempering experience, and he falls back on his relentless pursuit of excellence to justify what appears to be a lifetime of professional and personal cruelty. Morris may be too attached to the out and loud persona he has so carefully crafted to demonstrate mature growth in the shape of compassion and kindness.

No longer able to dance, Morris has taken up conducting and continues to choreograph, though his new dance works will be performed only after his death — a scheme devised by Umanoff that’s intended to secure the company’s future. Posthumously, the pieces may not strike viewers as intellectually relevant or emotionally compelling. But while Morris is alive, they likely provide comfort to a person whose legacy rests as much on his ability to shock and provoke as on his brilliance.