Q&A: John Canaday On Writing Poetry About The Manhattan Project 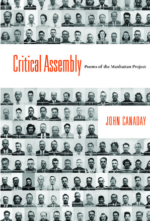 Cathy Corman: How did the project that became Critical Assembly begin? How did it take shape? How did you know when it was complete?

John Canaday: After graduating from college in 1983 (where I majored in literature and minored in physics), I moved to London on a Thomas J. Watson Fellowship to study American expatriate writers and write my own poetry. It was a time of great tension between the United States and Soviet Union: the height of Ronald Reagan‘s evil empire rhetoric. I found myself looking up at the sky and imagining Intercontinental Ballistic Missiles passing overhead.  But what could a poet do? As W.H. Auden wrote in his elegy for Yeats, “Poetry makes nothing happen.” That always rankled me. I felt that poetry could matter. Perhaps here was a chance to put that to the test.

I was also fascinated by the contrasts and similarities between scientific and literary modes of perceiving the world, so here was a topic that combined a number of my main interests. I was convinced that poetry offered a way of exploring the development of nuclear weapons that would yield useful insights: that by focusing on the variety of human perceptions and experiences that combined to make nuclear weapons possible, we might revise our own prejudices and misunderstandings, which seemed to be leading us toward catastrophe.

I spent thirty-three years researching and writing, revising and researching more to complete Critical Assembly.  I decided it was ready to publish when the collection had reached a “critical mass“ of voices representing both a wide variety of the individuals involved as well as the broader arc of the project as a whole.

In an important sense, though, the book isn’t complete. There are tens of thousands of voices I haven’t included. There was the training of the 509 Composite Group, which dropped the bombs on Hiroshima and Nagasaki; the decision among politicians and scientists and military leaders to use the bombs on Japan; the preparations on Tinian; and the bombings of Hiroshima and Nagasaki themselves. These are the subjects of a second volume, on which I’m currently working.

What would your ideal reader need to know before reading the collection?

The only thing my ideal reader needs to know is that these poems are not obscure.  They are,  rather, efforts to render this crucial episode in our history accessible in terms of human traits we all share.

My hope is that each poem provides context for itself and its neighbors. Each explores a moment of crisis in a particular individual’s relationship to the Manhattan Project, and collectively the poems provide readers a sense of both how nuclear weapons came to be and what that being means to us.

In addition, I offer readers background information where they might want it.  There are appendices containing biographical sketches, notes on individual poems, and a bibliography for further reading.

What were the biggest surprises along the way as you researched the project?

There were surprises of historical fact. For example, I didn’t know there was an internment camp for Japanese Americans in Santa Fe, about a mile from where the Los Alamos laboratory maintained its front office.

But I suppose the biggest surprise was how literary the project already was. Not only did the scientists constantly compare their experiences to works of literature, from Alice in Wonderland to The Magic Mountain, but they also showed Frankenstein in the base theater, they mounted a production of Arsenic and Old Lace in which Oppenheimer played one of the corpses, and they named the test of the first implosion bomb “Trinity” after John Donne’s poetry. On and on. There was even a senior mathematician named Donald “Moll” Flanders. In using their experiences as a basis for poetry, it didn’t feel to me as if I was imposing my own agenda but rather following their lead.

The collection moves from persona to persona and voice to voice. Each poem has its own feet/meter/rhyme scheme. How did you decide which schemes were right for which characters? Can you give an example?

Sometimes it seemed obvious which form suited a particular voice. Richard Feynman, for example, practically begged to be a sestina, because that form’s use of repeating end words simultaneously embodies, on the one hand, the way his mind must have revolved around and around the twin obsessions of physics and his wife’s failing health, and, on the other, presents the writer with a challenge not unlike the code making and breaking that Feynman so delighted in and shared with his wife. So the form seemed to offer a way to represent a kind of cross-section of Feynman‘s mind.

Other intersections of form and voice had to be discovered by trial and error. Victor Weisskopf, for example, began as a series of two-line stanzas before ending up as a sonnet. And I had to invent still other forms—for Klaus Fuchs or Joseph Rotblat, for instance.

Do you have favorite characters in the collection?

I ended up deciding not to include anyone who wasn’t a favorite. I wanted each voice to be true to itself (insofar as I could judge such a thing), and I wanted each to speak to, not for, me—and, therefore, I hope, to the reader.

But of course at any given moment I do have particular favorites. They shift around all the time. At the moment, off the top of my head, I’d say Janet Coatesworth, Edith Warner, Richard Feynman, Robert Oppenheimer, Kitty Oppenheimer, Niels Bohr, Klaus Fuchs, Donald Mastick, Bernice Brode, Chien-Shiung Wu, Harriet Peterson, and Joe Willis.

How much science did you need to learn to understand what you came to accept as the “story?” How much “history?” Favorite sources?

JC: Enough of each to empathize with the people whose voices I was attempting to render. I wanted to get a feel for the time and the work they were doing, and I wanted to get the details right. So I read a lot of history and a lot of history of science, along with technical histories of the project and a large number of declassified letters and memos detailing the work.  But my favorite sources were the Los Alamites themselves, many who generously shared their memories and insights with me over the years.

The first poem of the collection is in the imagined voice of William Laurence, a reporter present at Los Alamos to chronicle the development of the nuclear bomb. The last words of this poem are: “While I doctored words, they nursed light.” Do you identify with Laurence? Are you simultaneously, by virtue of being a poet, a doctor of words and also a nurser of light?

It’s not so much that I identify with Laurence, but in enlisting him as my herald, I do take advantage of our shared dedication to “doctoring words,” as well as the fact that we both came to the project as outsiders hoping to open windows through which the general public might look inside.  In the next volume, that role will be played by Hal Olsen, a Navy auto-pilot repair specialist and amateur artist who painted the nose art on many of the B-29 bombers on Tinian.

In the preface to your collection of essays, The Nuclear Muse: Literature, Physics, and the First Atomic Bomb, you announce that “this book crosses boundaries.” It seems to me that it — as well as Critical Assembly — insists on the importance of interdisciplinary inquiry and pursuits. Might you explain a bit more about your commitment to crossing disciplinary boundaries, especially at a cultural and political moment when science, not humanities, seems to be held most in esteem?

It’s undoubtedly ironic that I chose the development of such horrifying new weapons as the context in which to express a love of physics and literature. But ironies abound in the Manhattan Project, not least that these scientists are themselves an excellent example of the importance of the arts, to which they turned again and again in their search for ways to understand and express their experiences with the technical artifacts they were building and the boundaries they were crossing in the process.

To be successful in our time—to contribute to society and receive recognition for that contribution—requires specialization. This is a fairly recent development, but it is creating rather rigid divisions in our culture. And where there are divisions, there are partisans. Curiously, the Manhattan Project—or at least the Los Alamos branch of it—shows us how productive we can be when working cooperatively rather than competitively. Its scientific leaders pushed for free exchange of ideas among all the scientists; the military pushed for complete compartmentalization, with only a few people in on the big picture. The result was Los Alamos, where, by and large, the scientists were free to talk amongst themselves while remaining isolated from the general public.

The Nuclear Muse and Critical Assembly are my own attempts to push back against compartmentalization, both because I think disciplinary boundaries, though fruitful in many respects, also create exclusionary zones that can impoverish us as individuals and as a society. An emphasis on STEM, for instance, while valuable in obvious ways, leads us to privilege an understanding of mechanisms and neglect a harmonizing understanding of motives and mores.  Science teaches us what we can do, but the arts explore why we might want to do it and what doing it might mean.

You hover in all of your poems in a place of reverence for nature but not necessarily God. When you wrote poems about living and working in Jordan, you frequently described ancient landscapes and the sights and sounds of Muslim worship. My sense was that you wished you could be a believer in something greater than the awe-inspiring forces of nature—but that you cannot and do not. Similarly, you portray those working on the Manhattan Project as men and gods as they unleash forces and secrets of physics and nature. Do you think much about God? Are you, in reality, a modern-day Transcendentalist?

I’d say that’s as good a description of my spiritual condition as any. I’d be proud to be considered an inheritor of Emerson’s, Thoreau’s, Fuller’s faith in humanity’s potential “divinity” (whatever that might mean, I assume it’s something good). But I’m equally of Melville’s camp: humanity seems to me just as often a crabbed, hobbling Ahab, obsessed with achieving its own maniacal ends no matter the cost to nature, self, or others. I’d love to believe in God or, lacking that, a higher power, since our own power seems too high too often and too often misused. But where’s the evidence of a heavenly parent watching over us, curbing our missteps, leading us to love rather than desecrate? We seem, as a species, to be growing faster in evil than in good—at least our excesses are increasingly excessive in the former direction.

I don’t mean to portray the people who built the first atomic bombs as gods, nor did most of them think of themselves that way (I don’t know of any), though they sometimes applied that hyperbole to an exceptional member of their tribe (Niels Bohr, for instance), and they often felt they were tampering with “forces hitherto reserved to the Almighty” (though it was a military man who used that particular phrase). As examples of Transcendental potential go, they rank pretty high in my estimation. Again and again, I’ve been impressed by their thoughtfulness, the complexity and nuance of their attitudes, the effort they put into doing the right thing, insofar as they could see it. The people involved in the Manhattan Project were, on the whole, a group I’d welcome spending time among. And so I have.