A New Biography of Jane Jacobs, The Urban Visionary of Greenwich Village

Eyes on the Street: The Life of Jane Jacobs by Robert Kanigel 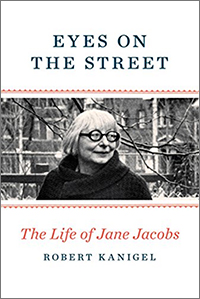 “Let your life be a counter-friction to the machine,” admonished Henry David Thoreau in his 1848 essay, On the Duty of Civil Disobedience. Don’t sit back and complain, Thoreau urged.  Let your conscience guide you to derail systems of power that are immoral and unjust.

Urban activist and path-breaking writer Jane Jacobs, who died in 2006 and would have turned 100 this year, was a born “counter-friction” who delighted in thwarting wrong-headed political and intellectual machines. In grade school, Jacobs challenged teachers, displaying a confidence and independence of mind that disregarded – even disrespected — authority.  Forced to copy two pages from a history book as punishment for some infraction, Jacobs asked her teacher which two pages she had in mind.  Any two pages would do, her teacher replied.  Jacobs copied the caption under the frontispiece: “Columbus Landing at San Salvador” and declared herself done. When the teacher insisted on a different two pages, Jacobs refused and went home.

Robert Kanigel recounts this and many other instances of Jacobs’s disobedience in his hefty biography, Eyes on the Street: The Life of Jane Jacobs.  Like others who have researched the anti-automobile, pro-walking-city crusader, Kanigel explains how the uncompromising renegade came to publish The Death and Life of Great American Cities in 1961, as well as seven other books throughout her life. The Death and Life stands as one of the last century’s fieriest critiques of slum clearance, massive housing projects, and urban renewal. Kanigel chronicles events leading to Jacobs’s showdowns with New York City planner Robert Moses to save Greenwich Village from demolition and to preventdevelopers from running a highway through Washington Square Park.

A skilled writer and researcher with a string of interesting non-fiction books to his name, Kanigel incorporates insights of other well-crafted, if partial, portraits of Jacobs.  These include Alice Sparberg Alexiou’s concise biography, Jane Jacobs: Urban Visionary (2006), Max Page and Timothy Mennel’s edited collection of provocative essays, Reconsidering Jane Jacobs (2011), and Glenna Lang and Marjory Wunsch’s superb middle-grade book, Genius of Common Sense: Jane Jacobs and the Story of The Death and Life of Great American Cities (2012), whose photographs of mid-century Lower Manhattan are reason enough to recommend its purchase. Peter Laurence traverses some of the same material in his recent, brilliant intellectual biography Becoming Jane Jacobs (April 2016), situating Jacobs’s ideas in the ferment of modernist architectural impulses and the birth of the discipline of urban planning.  And the flood of Jacobs analysis is hardly slowing down: a new collection of interviews has just been published, Jane Jacobs: The Last Interview and Other Conversations, along with a new documentary, Citizen Jane, which features narration by Academy Award-winning actress Marisa Tomei.

Kanigel attempts what others have yet to try: an exploration of what it was like not just to live with such a counter-friction, but also to be that person. The result is a mixed success set in a context that sometimes misses important connections.  His tone and style are at times irritating, relying too often on italics and a presumptuous third-person plural to create a grating false intimacy between himself, his subject, and the reader.

Kanigel does a terrific job explaining what it was like to live with a chronically (and sometimes needlessly) oppositional person.  He reports that Jacobs’s children called her and her husband by their first names – not “Mom” and “Dad” – and that they suffered in myriad ways from their parents’ unconventional, at times neglectful, approach to parenting.  A young relative of Jacobs’s husband Bob lived with the family in the early 1980s, long after the couple had moved from Greenwich Village to Toronto to prevent their boys from having to register to serve in the Vietnam War.  Living with Jacobs, this relative reported, was “like living with Zeus.” She described the atmosphere in the home, especially at supper, as suffocating, with intellectual argument so intense that it felt like “pure blood sport.”

What Kanigel has a harder time getting a bead on is Jacobs’s experience of herself.  Was she ambitious and egotistical or simply inept emotionally?  Or, perhaps, both?  Kanigel can’t quite decide.  He describes “excesses of her personality” and finds Jacobs’s self-description as “ordinary” but “articulate” disingenuous.  He reports that despite Jacobs’s obvious affection for her husband, she did not cry at his funeral – and, in fact, claimed never to cry.

Kanigel wonders whether Jacobs might have been wounded when Bob’s young relative decided to move out of the home in Toronto. “Jane hurt?” he writes, “Whether she was or not, they’d probably never have talked about it.  Feelings were something Jane was not inclined to discuss or explore, weren’t part of the otherwise vast, all-encompassing universe of discourse she made her own.” Continuing in his judgment of her character, Kanigel concludes that Jacobs was often clueless when it came to her impact on others. Wonderful when it came to exchanges of ideas, Jacobs didn’t “trade intimacies” in friendships, was often needlessly combative and cruel, and didn’t pick up on opportunities to “be kinder.”

Are these fair questions to ask of a subject whom Kanigel deems “one of the premier intellectual figures of the twentieth century?”  Would biographers of, say, John Dewey explore the implications of his inability to cry?  If they haven’t, should they?

Kanigel stumbles as he tries to assess Jacobs as a female intellectual, writer, and activist.  “Women, it has by now often been observed, are different,” he writes, as if oblivious to a generation of contentious debates about biology and culture in gender studies. “Any otherwise ‘natural’ arcs and patterns,” he continues, are “apt to be distorted by marriage, childbirth, family raising, and household running, or sometimes just the prospect of them.” If a biographer knows enough to place the word “natural” in quotation marks, should he not also question the application of such a concept to a woman’s life?  Given that New York City “powerbroker” Robert Moses is said to have dismissed Jacobs and her fellow Greenwich Village protesters as “nothing but a bunch of mothers,” and given that one of the persistent falsehoods about Jacobs is that she was an unemployed, uncredentialed housewife when she wrote The Death and Life, it makes sense to unpack her choices and experiences as a woman in post-war America.

While it may be fair game to assess Jacobs in terms of mid-20th century American gender norms, it’s an incomplete strategy unless the biographer locates her in the long trajectory of literate American women protesters.  Jacobs, Kanigel concludes, was not a novelist or poet– “no Hemingway or Robert Frost.” He describes her as a “different kind” of writer, “one that scarcely had a name.” Far too late in the biography, Kanigel places Jacobs alongside two other unconventional, effective women writers of her generation – Betty Friedan and Rachel Carson– who also “expressed themselves with intensity and feeling” – and, he might have added, profound intellect.

An editor should have pushed Kanigel to extend the comparison back to the 19th century so that Jacobs would simultaneously appear less strange and more in step with the “public housekeepers” whose powerful, effective writings changed the ways Americans understood their responsibilities towards others. That pantheon of passionate, female counter-frictions includes Margaret Fuller, Lydia Maria Child, Harriet Beecher Stowe, the Grimké sisters, Helen Hunt Jackson, Jane Addams, Charlotte Perkins Gilman, and Ida B. Wells, to name a few. Placed in this more inclusive canon, Jacobs might not seem so odd, her protests more in line with the thinking and avenues available to those born female and born also to speak up and act out to make a difference.

Too many who enjoy the current renaissance in urban living are unfamiliar with Jacobs’s life and writings. Kanigel’s biography serves as just one way to appreciate her significance and brilliance. A Marvelous Order, an original opera pitting Jacobs against Robert Moses, premiered last year and will be performed in New York next spring.  In October, Random House will release a collection of Jacobs’s essays and talks, Vital Little Plans. However, for those curious about this most intriguing of counter-frictions, perhaps the most interesting and effective way to encounter her is to pick up a copy of The Death and Life of Great American Cities, which has never gone out of print.