The Hell-bent Women of Suffrage

There are but 29 words to the 19th amendment to the U.S. Constitution, which was formally adopted on Aug. 26, 1920: “The right of the citizens of the United States to vote shall not be denied or abridged by the United States or by any State on account of sex.” Ellen Carol DuBois explains in her new book, Suffrage: Women’s Long Battle for the Vote, why it took so damn long and was so excruciatingly difficult to convince American men to adopt these very few words as law. 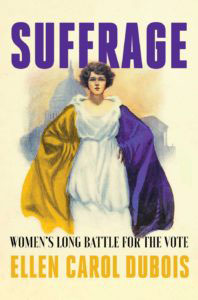 DuBois, a professor emeritus at U.C.L.A., has long been a champion of the academic field of American women’s history. She has written extensively on 19th-century women’s political activism, focusing on suffragists Elizabeth Cady Stanton, Susan B. Anthony, Margaret Fuller, and Stanton’s daughter Harriet Stanton Blatch, among others. She has timed the publication of Suffrage to coincide with the 100th anniversary of women’s ability to vote in federal, not just state, elections.

DuBois’s familiarity with the topic helps her balance a desire to craft a dramatic narrative around individuals with a need to familiarize readers with an alphabet soup of political organizations and their specific platforms. In addition to the usual pantheon of suffrage greats, DuBois includes such champions as Inez Milholland Boissevain, a tireless advocate (and intrepid horsewoman) who campaigned for woman suffrage in the U.S. West. And should readers not know or understand why they should care about the differences between, say, the C.U. (Congressional Union for Woman Suffrage) and NAWSA (National American Woman Suffrage Association), they are in capable hands as DuBois navigates an unspooling tangle of acronyms.

Many of the divisions that led to competing and splintering groups were related to racism, classism, and nativism. DuBois explains that early suffragists were almost always abolitionists. After the Civil War, some of these women — most of them wealthy, educated, and white — turned their frustrations at being thwarted from achieving their political goal on African-Americans and immigrants, and then on one another. Such conflicts led former allies Elizabeth Cady Stanton and Lucy Stone to stop speaking and then, a generation later, divided Carrie Chapman Catt and Alice Paul.

Though DuBois tackles racism head on, she offers a potentially troubling qualification in her introduction, which arises periodically in the book, noting that “every other white-dominated popular political movement of that era similarly accommodated to insurgent white supremacy. And yet only the woman suffrage movement — not the Gilded Age labor movement or the People’s Party or even Progressivism itself — has been so fiercely criticized for the fatal flaw of racism.”

On one hand, such words make good historical sense. Readers should have opportunities to appreciate what led to the “movement’s decisive turn away from equal rights for African-Americans in those years.” On the other hand, DuBois runs the risk of serving as an apologist. She does not shy away from including some of the most offensive of her subjects’ positions and words, but as she contextualizes, she at times can appear to be excusing positions that justified oppression.

For example, she introduces readers to the Kentuckian Laura Clay, who believed that the vote for women should be tied to a literacy qualification. “Her attitude toward black people is extremely distasteful to the modern ear,” DuBois writes, “but in the late 19th-century southern context, she was a racial moderate. … Clay argued that her approach was a far more civilized way to undo constitutional protections of black men’s right to vote than lynching, and it would be legally more defensible than fraudulent voting rules directed against black voters.” DuBois’s use of the word “but” to qualify Clay’s “context” appears to justify it. Would that an editor had restructured DuBois’s sentence to avoid giving even the slightest weight to such views.

Readers likely will come away from Suffrage with a newfound appreciation of activists’ engagement with sophisticated political strategy as well as for their (yes, the word must be used) persistence. When national political parties ignored their calls for universal suffrage, organizers threw in their lot with temperance crusaders, basing the need for women’s votes on moral reform. When it became clear to suffragists in the late 19th century that all avenues leading to a Constitutional amendment had closed, they worked to gain access to votes on a state-by-state basis. When activists grappled with Southern Democrats who argued that woman suffrage would give too much power to African-Americans, they turned their energies to the American West. When they could not mobilize sufficient support among Republicans out West, they embraced working women and trade unions to expand their appeal. And when Democrats appeared to offer them a path to legalized voting, women — themselves unable to cast ballots — worked to elect candidates who, once in power, were more likely to expand the franchise to them.

Suffrage will underscore, for those who follow the current primary races, how female candidates have overcome awe-inspiring odds to participate at the national level, both in their own lives and historically. Surely, they will pause when they read the response that Susan B. Anthony offered to the judge presiding over the trial resulting from her decision to cast an illegal ballot in November 1872. When the judge asked if she had voted as a female, Anthony answered, “Not as a female at all, sir. I presented myself as a citizen of the United States.”