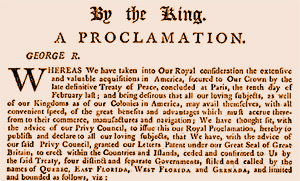 Backstory, the national, hour-long, weekly history show, aired this piece on the conclusion of the French and Indian War. Producers wanted pieces to explore American Wars that had ended messily. They were marking the 10-year anniversary of “Mission Accomplished,” President George W. Bush’s estimation that US military operations in Iraq had been successful and were about to end. In fact, the conflict would continue another decade, with most of the casualties yet to come. My piece explores the history and after-effects of the Royal Proclamation of 1763, which ended one war and laid the foundations for another three decades of violent conflict.