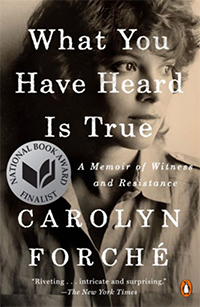 My practical, lawyer husband sees me reading American poet Carolyn Forché’s heart-stoppingly beautiful book, What You Have Heard is True: A Memoir of Witness and Resistance. The book was nominated this fall for a National Book Award for nonfiction. My husband wonders who Forché is and what her book is about. I tell him she is an award-winning poet and that the book is about her time in Central America in the late 1970s. I then hand him her most famous poem, “The Colonel,” which she wrote in 1978, as El Salvador was poised on the precipice of a bloody civil war. Its first line serves as the title of the memoir. My husband begins to read the poem.

“What you have heard is true. I was in his house. His wife carried a tray of coffee and sugar. His daughter filed her nails, his son went out for the night. There were daily papers, pet dogs, a pistol on the cushion beside him. The moon swung bare on its black cord over the house.”

Forché describes a typical, Salvadoran military man’s household. Supper is served with crisp hospitality. Forché turns her eye to the walls surrounding the house, noting “[b]roken bottles” which “were embedded […] to scoop the kneecaps from a man’s legs or cut his hands to lace.” The colonel dumps a paper sack of dessicated human ears onto the tablecloth, then speaks:

My husband finishes the piece. Though moved, he asks another essential question. What makes “The Colonel” a poem? It’s not formatted in obvious lines, doesn’t have a meter, does not rhyme.

Literary analysts more scholarly but in no way more perceptive than my husband asked a similar question of Forché’s poetry in the early 1980s, when she published The Country Between Us. Had the slim volume containing “The Colonel,” as well as six other poems chronicling the effects of military dictatorship and violent civil war on El Salvador, been hijacked by activism? Had this gifted young poet, whose first volume had won the Yale Series of Younger Poets competition and a Guggenheim Fellowship, abandoned the crafts of her calling in favor of crude political advocacy, even “reportage.” Defenders, including American poet Denise Levertov and Argentinian dissident writer Jacobo Timerman, hailed Forché as a “new Neruda.” They saw her as leading the poetic charge against the profound de-politicization of the Reagan administration’s secret Central American dirty wars.

On one level, Forché uses the memoir to tell the story of her political awakening, taking readers on a hair-raising journey through El Salvador’s cities and campos. The memoir educates readers who may not know the story of El Salvador’s ruthless, American-backed military regime that would kill as many as 75,000 and go on to displace half a million within and another half million outside of the country. It is also an education, Forché explains in her acknowledgments, for “the young people from El Salvador who were brought to the United States by their parents because of the war and its aftermath.”

“This is for them,” she writes, in order that they might “know more about their birth country.” On another level, one as important to her as her truth-telling, Forché uses the memoir to explore with exquisite sensitivity questions about artists’ roles in moments of holocaust and terror. It is a mission she has taken on since she abruptly fled El Salvador, at the instruction of then-archbishop Óscar Romero, who would be assassinated a week later by the same military men in the habit of keeping human body parts as trophies.

Forché’s guide as she searches and learns is the central character in the memoir, Leonel Vides Gomez, an enigmatic Salvadoran coffee planter, amateur military tactician, and champion of El Salvador’s desperately poor farmers. He calls her “Papu,” as did the Taoseño elders with whom she had lived in the early 1970s. Leonel immerses Forché in the language, history, culture, geography, and politics of his country. At the book’s beginning, an inflection point which Forché describes as an end, she and Leonel walk through a sorghum field where they come across “the whine of flies, the hissing and belching of turkey vultures, a flapping of wings like applause in the maize stalks as the fattened birds try to lift themselves.” Enlisting the same linguistic strategy she deployed in “The Colonel,” Forché does not spare readers from the graphic details of brutal, political murder. “I don’t know what I had expected to see,” she writes, “but not the swollen torso of a man with one arm attached to him, a black pool of tar over his crotch. I didn’t expect that his head would be by itself some distance away, without eyes or lips. The stench in the air is familiar: a rotting, sweet, sickening smell. Human death. I bend down when I see the head, but I hear Leonel saying, ‘Don’t touch it. Let the others do it.’” What to do with human remains? What to do with the memory of human remains? This has been at the center of Forché’s project for the better part of 35 years.

Not for her, Forché concludes, to “[l]et others do it.” She chronicles her conclusions as to what, exactly, a poet should do in the middle of state-sponsored terror, as she visits American ambassadorial offices in San Salvador, rural areas without running water or electricity, prisons where men are caged in crates built to hold washing machines, clinics without antibiotics or anesthesia, motels where she hides from death squads. Transcriptions of pages from the notebooks she carried with her are often the most powerful parts of the book. One such entry reads, in part: “the light dances on walls and coals give off sparks like the salt of stars in fields cane smoke blackens the air coffee ripens on the high slopes red coffee cherries in white mist it is the time of bloody stool in the ditch of maggots in wounds of flies in the clinic bodies found by the roadside are covered with lime no one wants to eat the fish from Lake Ilopango anymore the fish have been eating the dead.” These random juxtapositions and stream-of-consciousness jottings serve as seeds for some of Forché’s most powerful poems.

The memoir chronicles Forché’s transformation as a poet, given that she believes as she sets out for El Salvador that poems can’t make a sizeable difference in the world. In places other than the United States, she knows, poets and musicians are celebrated as political and cultural heroes. But in America, she is aware, it’s ridiculous to think that poetry has the power to change hearts and minds. “Something for your poetry, no?” the Colonel asks Forché after he dumps dried ears on the supper table. Surely something, but what, Forché repeatedly wonders in the memoir. The joke is on Forché. When, at last, she is able to publish The Country Between Us, two journalists take note. Forché’s poetry catches the imagination of Pete Hamill and Nicholas von Hoffman. Their notice is enough to set a spark whose fire caught hold in universities and religious communities around the country. Forché went on to give talks and readings in 49 states – in all but Hawai’i.

Forché has written extensively elsewhere about her difficulties knowing what to do about the intersection of artistic and political principles after what she had seen and experienced in El Salvador. She wrote that poems “in the mode of the first-person, free-verse lyric” were no longer sufficient or appropriate to her:

During my formative years as a poet (and in my educational milieu), ‘form’ was regarded as a container rather than a force, examined for its features and flaws rather than the consequences of its use. […] [T]he poem was regarded as a species of discourse, to be valued for itself and for its utility as communicator of feeling and thought.

Her way forward was to explore a concept she described as the “poetry of witness.” The work would be, she wrote, “happening with me which was not about me, having to do with attention rather than intention, a work which would eventually disclose itself as self-altering rather than self-expressive.” Her poems therefore would not just be about linguistic play or self-reference. Instead, she would use language to communicate the cries of suffering she, herself, had witnessed. “The historical density of the language,” she wrote, “seemed to limit its play of signification, as the cry of suffering remains a cry. This poetry did not have the function of recording or representing, but rather of attending to the making of its utterance.”

Suffering from a writerly form of PTSD, especially as she and her photographer husband, Harry Mattison, chose to live and work in countries such as South Africa, which were undergoing their own political wars, Forché turned to anthology, collecting poems borne of the kind of violence she was working to understand politically, morally, and aesthetically. In an introductory essay to Poetry of Witness: The Tradition in English, 1500-2001 (2014), Forché wrote that a theme unifying such poems of witness was an ability to make “present to us the experience of the other.” Poetry, she wrote, “is the experience, rather than a symbolic representation.” Readers, she concluded in this essay, bear responsibility to appreciate this other, to “become ourselves witnesses to what it has made present before us. Language incises the page, wounding it with testimonial presence, and the reader is marked by encounter with that presence. Witness begets witness. The text we read becomes a living archive.”

Showing rather than telling in What You Have Heard is True, Forché has created a “living archive” for all who are lucky enough to read the book. As she brings the work to a close, Forché asks: “what does poetry have to do with anything?” Like Margaret Atwood in the recently published dystopian novel The Testaments, Forché answers by writing about writing. The answer is as simple and complicated now as it was when Forché returned to the United States from El Salvador in 1980. How will we remember? What role will our poets have played? Will they remain quiet? Caught up in the solipsisms and nihilisms of theory? In 2019, when Lt. Col. Oliver North’s Wikipedia page describes him as a “political commentator, television host, military historian, author, and retired United States Marie Corps lieutenant colonel,” the words of this extraordinary poet conjure the senseless brutality of one of America’s dirty wars and also remind us that words matter.