Forty-seven years ago this month, U.S. Supreme Court Justice Lewis Powell concluded that the state of Texas did not have to remedy inequalities in school funding across deeply segregated school districts. Four other justices concurred to make a majority. Education, Powell wrote in the Court’s 1973 decision, was not a “fundamental interest” guaranteed by the Constitution. Therefore, it was up to state lawmakers to address any problems. This logic appalled the plaintiffs, who had sued and won in district court. The state had appealed the case to the Supreme Court, not wanting to spend more money on students in poor districts. 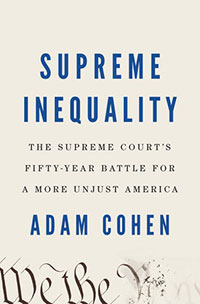 Upon learning of the Court’s decision, Demetrio Rodriguez, a lead plaintiff in the case, expressed “deep and bitter resentment” toward Powell and the justices who agreed with him. Rodriguez was also angry at those “who nominated them to that high position.” Readers of Adam Cohen’s Supreme Inequality: The Supreme Court’s Fifty-Year Battle for a More Unjust America, cannot help feeling similarly. Cohen’s book, published by Penguin Press in February, provides an exacting analysis of 50 years of Supreme Court case law, from the end of the Warren Court to the present day.

“The Supreme Court is rarely included in these analyses,” Cohen writes, “even though it has been one of the most powerful drivers of income inequality over the past half century.”Cohen’s mission is to help readers appreciate the role the Court has played in widening the gap between America’s rich and poor. Many have scrutinized the income tax system, market regulations, and Congress to understand how, in the early 21st century, the super-rich have come to own such a disproportionate share of wealth.

Cohen counsels readers not to view Brett Kavanaugh’s confirmation to the Supreme Court in 2018 as a watershed moment. Similarly, he can’t muster outrage when he describes Republican senators’ refusal in 2016 to consider President Barack Obama’s nominee Judge Merrick Garland. Instead, Cohen lays his anger at the feet of President Richard Nixon and his able henchmen. He describes their ruthless and ultimately successful campaign to smear and bully Justice Abe Fortas into resigning from the Court in 1969. Cohen argues that it was from this moment, an original sin in the annals of American politics and jurisprudence, that Republicans began their campaign to turn the Court away from the victories of F.D.R.’s New Deal and L.B.J.’s War on Poverty and toward injustice, hypocrisy, and inequality.

Cohen takes a scalpel to case law to make his point. He organizes his analyses around themes, with chapters relating to poverty, education, campaign finance, democracy (the election of George W. Bush), employment, corporations, and criminal justice. A lawyer and a gifted writer, Cohen examines footnotes, dissenting and concurring opinions, amicus briefs, and scholarly articles that set out the foundations of legal precedents. Because of Cohen’s talents as a storyteller, even general readers will come to appreciate the role that the justices have played in stacking the deck against the poor.

Cohen is also a terrific historian. He intersperses biographies of judges throughout, so readers come away from Supreme Inequality with a good sense of who they are, their relationships to one another, and how their individual identities motivated them to reach pivotal decisions. Cohen elegantly drops descriptions of historical events into the text, helping readers connect what might otherwise be obscure details or ideologies to larger movements. His scope of knowledge is vast. He is as comfortable discussing events in the 1960s as he is explaining trends in the 2010s.

Echoing the cadences of Thomas Jefferson in the Declaration of Independence, Cohen lists his grievances against the Supreme Court: “In campaign finance law, it has opened the floodgates to money from wealthy individuals and corporations. In election law, it has upheld rules and practices designated to make it more difficult for the poor and racial minorities to vote, and struck down a key part of the Voting Rights Act. … And on a wide variety of issues, the Court has ruled, often cruelly, against the poor.” In 1776, after providing a list enumerating the king’s offenses, Jefferson and the other founding fathers pledged loyalty to one another and called for revolution. As I read Cohen’s words, I wanted him to drop his composure every once in a while and rattle his saber. Perhaps such measured reason — a modern-day dose of what Tom Paine called “common sense” — will lead to expanding fairness and enduring change.At each chapter’s end, Cohen summarizes counterfactual scenarios to underscore how much more equal America could have been had politicians acted better and had the justices ruled differently. Readers are repeatedly confronted with a cavalcade of “ifs”: if Nixon had not managed to remove Abe Fortas from the Court, if the court had seen the poor as a distinct class, if the Court had upheld Congress’s campaign finance law, and if justices had ruled that “all valid votes should be counted.” The rhetorical strategy wore on me, as did Cohen’s need to detail again and again just how unequal the U.S. has become.